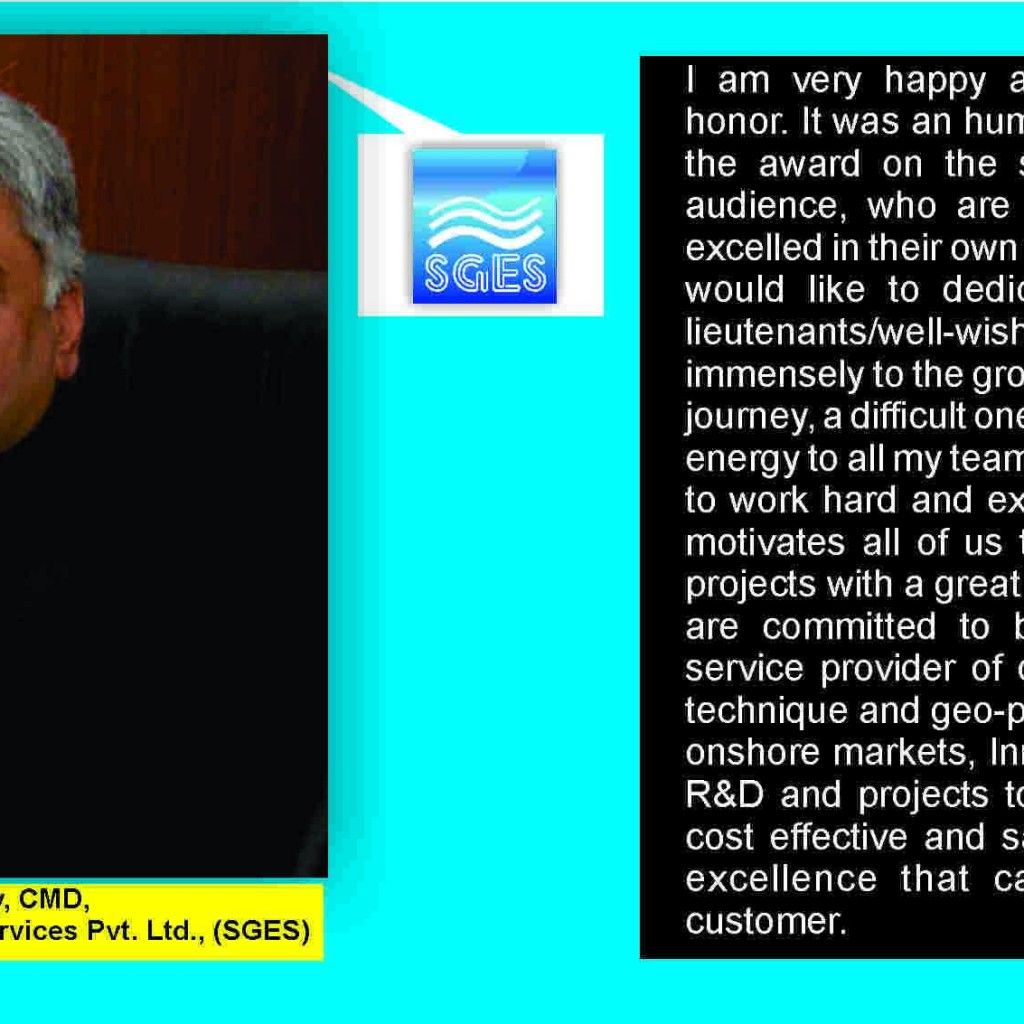 India’s Fastest Growing Company in Geotechnical Engineering 2015 to the firm Sarathy Geotech and Engineering Services & Entrepreneur of the Year 2015 to the Founder CMD Dr.C.R Parthasarathy

I am very happy and overwhelmed with this honor. It was an humbling experience to receive the award on the stage in front of a vibrant audience, who are amazing personalities and excelled in their own field and the media as well. I would like to dedicate this award to all my lieutenants/well-wishers who have contributed immensely to the growth of SGES throughout the journey, a difficult one though. I will bring back this energy to all my team members, encourage them to work hard and excel further. This recognition motivates all of us to continue servicing future projects with a great sense of responsibility.Not but the least, for whatever little achievement earned so far, there is a lady behind me, my wife, Mrs Anupama, who co-founded SGES and shared all the gain & pain, involved and supported in every decision making so far. I think the credit also goes to her. We will share together every bit of joy from these awards. Outlining the vision of the company, Dr. Parthasarathy said , we are committed to be the leading player and service provider of choice in the fields of Geo-technique and geo-physics for both offshore and onshore markets, Innovations coming out of our R&D and projects to be leveraged in providing cost effective and safe solutions & Operational excellence that can optimize costs to the customer

We provide Integrated Survey Services for Offshore projects and EPC for Onland Substructure Projects. We have consistently exceeded customer expectations by our solutions. This has been possible by the excellent staff and consultants that have expertise and experience working on several national and international proj- ects that calls for diverse expertise.

As an innovative Geo-technical and Geo-Physical company, driven by values, we provide top class solutions with value addition to customers that are backed by best practices.

Rated by Experts & widely acclaimed by thought leaders, India Leadership Conclave Annual Affair is just not a leadership forum, it symbolizes the hopes & aspirations of the billion people reflected by the speakers at the forum. “ILC POWER BRANDS” has  been rated in Asia as the most credible & coveted Awards developed by Network 7 Media Group consisting of eminent jury members of the different verticals of the society &  is conferred to the Individuals & Companies in its annual meet at the Indian affairs India Leadership Conclave & Indian Affairs Business Leadership Awards. since the institutionalization of the Business Leadership Awards in 2010, India Leadership Conclave & Indian Affairs Business Leadership Awards has been India’s most awaited & asia’s most respected set of Awards conferred to Companies & Individuals who have made their mark through their remarkable performances despite all odds & has made India Proud!. Since the last five successful years, the platform has recognized, felicitated more than 300 fortune 500 Companies & towering captains & Leaders of the Country